“It was during a recent meeting in New Delhi, Shri Shivraj Singh Chouhan invited PM Modi for the inauguration of the railway station at Bhopal, MP.

Modi Ji will attend the inauguration ceremony and dedicate this world-class railway station to the nation.

IRSCD has given the responsibility to Bansal Group for the operation and maintenance of the railway station and also Bansal Group is taking care of all the facilities like food stalls, office space, shop, power, platform maintenance, parking. Bansal group operates in the infrastructure and construction sector.

Bansal Group has invested nearly 100 crores to redefine old railway stations, the new ones and has a plan to develop the commercial areas in the railway station in two phases—office and shopping complexes in the first phase, in the second phase, a multi-specialty hospital and a five-star hotel”.

This world-class railway station has the ultra-modern eminities that will attract passengers and local public as well.

Not only does the Rani Kamalapati railway station looks like an airport but also you will get modern facilities like an airport such as departmental shops, gift shops, escalator, VIP lounges, AC dormitories, etc.

VIP AC lounges are developed for the passengers to feel comfortable if they need to wait for a longer timer period at the railway station and also separated AC lounges are available for the women.

This is a good initiative that will help the old aged people and also the handicapped ones.

Lifts and escalators are provided at the entrance and the exit of the Rani Kamalapati railway station. Now the passengers having a large number of luggage bags can commute easily between the platforms. 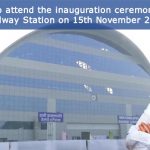